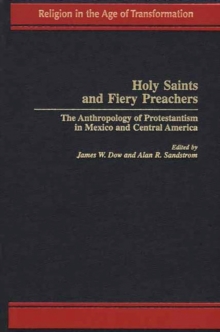 Holy Saints and Fiery Preachers : The Anthropology of Protestantism in Mexico and Central America Hardback

Based on empirical analysis, this ethnographic fieldwork and collection of original articles on contemporary Protestant religions in Mexico and Central America examines regions ranging from the Pacific coast in the north to Guatemala in the south.

These new studies reveal that Protestantism was in the rise in the last decades of the twentieth century because it was opposing political structures that were largely unworkable in a new age of economic expansion and population growth.

The studies cover regional and local variations in the growth of Protestantism, examine numerous reasons for the variations, and compare rural villages with modern communities.

While the Catholic Church remains only a marginal player in the conflicts taking place in local communities, the book concludes that the modern religious conflicts bear only a general resemblance to the anti-Catholic issues that impelled the original Protestant Reformation in Europe. Relying on traditional scientific principles of data recording and theory development, the contributors look into the lives of contemporary rural people, Indian and mestizo, and provide data that enhance the general study of modern religious movements.

The chapters examine, among other topics, the relationship between religion and demography, the role of leadership in church growth, the theories of Max Weber relating capitalism and Protestantism, religious conversion, and the modernization of Indian communities.

Scholars and students who are interested in cultural anthropology, religious change, and religion in Latin America will find in these pages a unique and enlightening examination of Protestantism's rise and spread in Latin America.