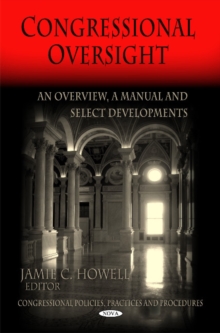 A fundamental objective of congressional oversight is to hold executive officials accountable for the implementation of delegated authority.

This objective is especially important given the huge expansion of executive influence in the modern era.

Given the role and scope of the federal establishment, the importance of Congress's review function looms large in checking and monitoring the delegated authority that it grants to federal departments and agencies.

This book highlights the reasons for expansion of the federal government; discusses the definition and purpose of oversight; reviews oversight techniques and identifies several incentives and disincentives to the conduct of congressional oversight.