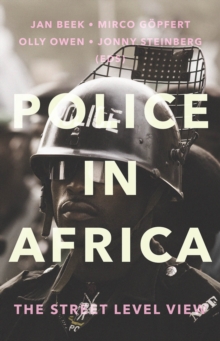 State police forces in Africa are a curiously neglected subject of study, even within the study of security issues and African states.

This book brings together important new work on the subject from a group of criminologists, anthropologists, sociologists, historians, political scientists and others, who have engaged with police forces across the continent and the publics with whom they interact to provide street-level perspectives from below and inside Africa's police forces.

The collection is in three parts; first it considers historical trajectories and particular configurations of police power within wider political systems, then examines the 'inside view' of police forces as state institutions -the challenges, preoccupations, professional ethics and self-perceptions of police officers, and finally looks at how African police officers go about their work, in terms of everyday practices and engagements with the public, and the meanings that are construed in the course of doing so.

The studies span the continent from South Africa to Sierra Leone, and illustrate similarities and differences in Anglo- phone, Francophone and Lusophone states, post- socialist, post-military and post-conflict contexts, and amid both centralisation and devolution of policing powers, democratic transitions and new illiberal regimes; keeping a strong ethnographic focus on ordinary police officers and police work at their core.