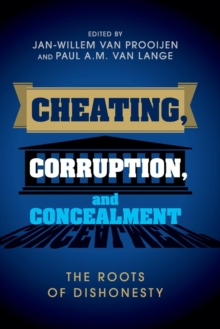 Cheating, Corruption, and Concealment : The Roots of Dishonesty Paperback / softback

Dishonesty is ubiquitous in our world. The news is frequently filled with high-profile cases of corporate fraud, large-scale corruption, lying politicians, and the hypocrisy of public figures.

On a smaller scale, ordinary people often cheat, lie, misreport their taxes, and mislead others in their daily life.

This book aims to resolve this paradox by addressing the question of why people are dishonest all too often.

What motivates dishonesty, and how are people able to perceive themselves as moral despite their dishonest behaviour?

What personality and interpersonal factors make dishonesty more likely? And what can be done to recognise and reduce dishonesty?

This is a fascinating overview of state-of-the-art research on dishonesty, with prominent scholars offering their views to clarify the roots of dishonesty.