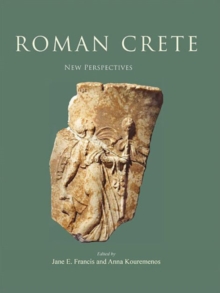 The last several decades have seen a dramatic increase in interest in the Roman period on the island of Crete.

Ongoing and some long-standing excavations and investigations of Roman sites and buildings, intensive archaeological survey of Roman areas, and intensive research on artefacts, history, and inscriptions of the island now provide abundant data for assessing Crete alongside other Roman provinces.

New research has also meant a re-evaluation of old data in light of new discoveries, and the history and archaeology of Crete is now being rewritten. The breadth of topics addressed by the papers in this volume is an indication of Crete's vast archaeological potential for contributing to current academic issues such as Romanisation/acculturation, climate and landscape studies, regional production and distribution, iconographic trends, domestic housing, economy and trade, and the transition to the late-Antique era.

These papers confirm Crete's place as a fully realised participant in the Roman world over the course of many centuries but also position it as a newly discovered source of academic inquiry.