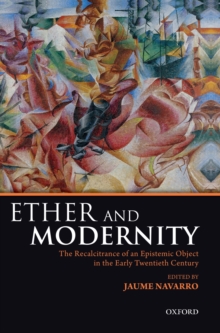 Ether and Modernity : The recalcitrance of an epistemic object in the early twentieth century Hardback

Ether and Modernity offers a snapshot of the status of an epistemic object, the "ether" (or "aether"), in the early twentieth century.

The contributed papers show that the ether was often regarded as one of the objects of modernity, hand in hand with the electron, radioactivity or X-rays, and not simply as the stubborn residue of an old-fashioned, long-discarded science.

The prestige and authority of scientists and popularisers like Oliver Lodge and ArthurEddington in Britain, Phillip Lenard in Germany or Dayton C.

Miller in the USA was instrumental in the preservation, defence or even re-emergence of the ether in the 1920s.

Moreover, the consolidation of wireless communications and radio broadcasting, indeed a very modern technology, brought the ether intoaudiences that would otherwise never have heard about such an esoteric entity. The ether also played a pivotal role among some artists in the early twentieth century: the values of modernism found in the complexities and contradictions of modern physics, such as wireless action or wave-particle puzzles, a fertile ground for the development of new artistic languages; in literature as much as in the pictorial and performing arts.

Essays on the intellectual foundations of Umberto Boccioni's art, the linguistic techniques of Lodge, and Ernst Mach's considerations onaesthetics and physics witness to the imbricate relationship between the ether and modernism.

Last but not least, the ether played a fundamental part in the resurgence of modern spiritualism in the aftermath of the Great War. This book examines the complex array of meanings, strategies and milieus that enabled the ether to remain an active part in scientific and cultural debates well into the 1930s, but not beyond.

This portrait may be easily regarded as the swan song of an epistemic object that was soon to fade away as shown by Paul Dirac's unsuccessful attempt to resuscitate some kind of aether in 1951, with which this book finishes.