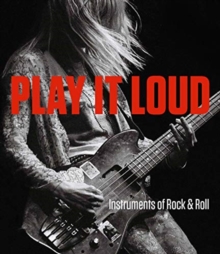 A brash and dazzling celebration of the instruments that created the sounds of rock and roll from the 1940s to the present dayPlay It Loud celebrates the musical instruments that gave rock and roll its signature sound-from Louis Jordan's alto saxophone and John Lennon's Rickenbacker to the drum set owned by Metallica's Lars Ulrich, Lady Gaga's keytar, and beyond.

Seven engrossing essays by veteran music journalists and scholars discuss the technical developments that fostered rock's seductive riffs and driving rhythms, the thrilling innovations musicians have devised to achieve unique effects, and the visual impact their instruments have had.

Produced in collaboration with the Rock & Roll Hall of Fame, this astounding book goes behind the music to offer a rare and in-depth look at the instruments that inspired the musicians and made possible the songs we know and love.