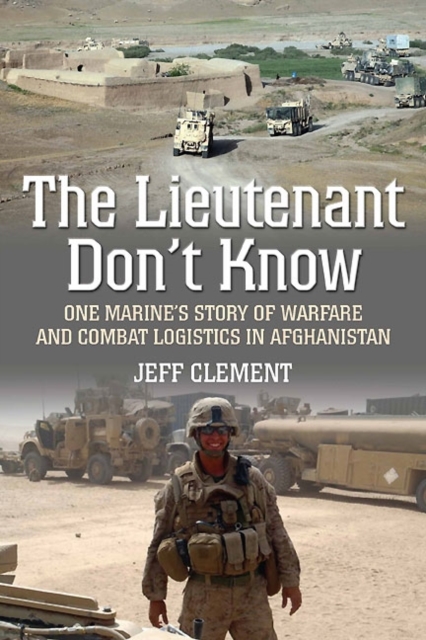 The Lieutenant Don't Know : One Marine's Story of Warfare and Combat Logistics in Afghanistan Hardback

In our wars since 2001 the term "front line" has long since lost its meaning, and the true combats have waged throughout the countries we've invaded, especially along the supply routes.

Our opponents have not been able to stand with conventional forces, but instead attack inside our lines, their presence everywhere, if not always discernible.

Into this mix of behind-the-lines attacks, combat logistics have played a larger role than ever. In Afghanistan particularly, the long convoy routes have been vulnerable to the same kind of surprise attacks suffered by the Soviets in past decades, the British 150 years ago, and Alexander the Great 2,000 years ago.

The combats surround, and in that godforsaken landlocked land, the means to supply a Western army has to be undertaken with blood and sweat, once the quick panacea of airpower is overtaxed. When he joined the Marines, Jeff Clement was not a high-speed, top-secret recon guy.

A logistician instead, he led combat convoys across treacherous terrain in southern Afghanistan through frequent enemy attacks in order to resupply US and British positions.

As such he and his vehicles were a constant target of the resistance, and each movement was a travail, often accompanied by thundering blasts as the insurgents paved their way with IEDs.

Each movement was fraught with danger, even as each objective had to be met.

As a Marine Corps lieutenant, he deployed to Afghanistan twice, and always found a learning curve, as men previously on the ground were more savvy, and the insurgents, there for the duration, were savvier still. The Lieutenant Don't Know provides a refreshing look at the nitty-gritty of what our troops have been dealing with in Afghanistan, from the perspective of a young officer who was perfectly willing to learn, and also take responsibility for his units in a confusing war where combat was not merely on the"front," but all around, and looking over all their roads.