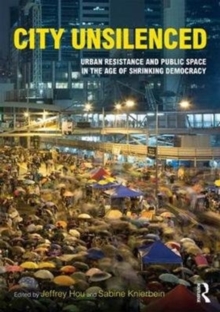 What do the recent urban resistance tactics around the world have in common?

What are the roles of public space in these movements?

What are the implications of urban resistance for the remaking of public space in the "age of shrinking democracy"?

To what extent do these resistances move from anti- to alter-politics?

City Unsilenced brings together a cross-disciplinary group of scholars and scholar-activists to examine the spaces, conditions, and processes in which neoliberal practices have profoundly impacted the everyday social, economic, and political life of citizens and communities around the globe.

They explore the commonalities and specificities of urban resistance movements that respond to those impacts.

They focus on how such movements make use of and transform the meanings and capacity of public space.

They investigate their ramifications in the continued practices of renewing democracies.

By better understanding the processes and implications of the recent urban resistances, City Unsilenced contributes to the ongoing debates concerning the role and significance of public space in the practice of lived democracy.