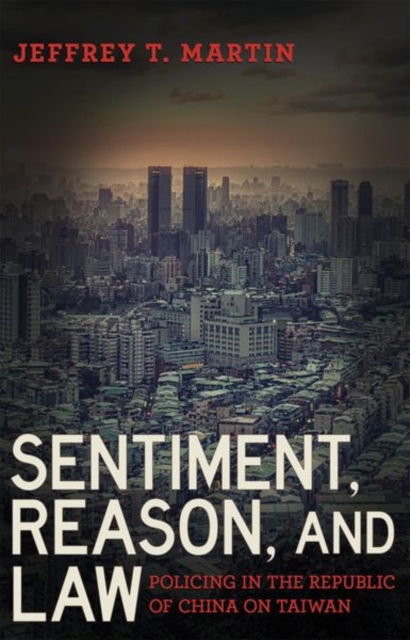 Sentiment, Reason, and Law : Policing in the Republic of China on Taiwan Hardback

Part of the Police/Worlds: Studies in Security, Crime, and Governance series

What if the job of police was to cultivate the political will of a community to live with itself (rather than enforce law, keep order, or fight crime)?

In Sentiment, Reason, and Law, Jeffrey T. Martin describes a world where that is the case. The Republic of China on Taiwan spent nearly four decades as a single-party state under dictatorial rule (1949-1987) before transitioning to liberal democracy.

Here, Martin describes the social life of a neighborhood police station during the first rotation in executive power following the democratic transition.

He shows an apparent paradox of how a strong democratic order was built on a foundation of weak police powers, and demonstrates how that was made possible by the continuity of an illiberal idea of policing.

His conclusion from this paradox is that the purpose of the police was to cultivate the political will of the community rather than enforce laws and keep order. As Sentiment, Reason, and Law shows, the police force in Taiwan exists as an "anthropological fact," bringing an order of reality that is always, simultaneously and inseparably, meaningful and material.

Martin unveils the power of this fact, demonstrating how the politics of sentiment that took shape under autocratic rule continued to operate in everyday policing in the early phase of the democratic transformation, even as a more democratic mode of public reason and the ultimate power of legal right were becoming more significant.