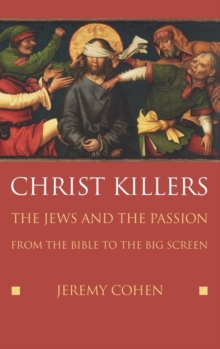 Christ Killers : The Jews and the Passion from the Bible to the Big Screen Hardback

The New Testament accounts of Jesus' crucifixion have stood at the bedrock of Christianity since it's birth in the 1st century, and they remain among the essential foundations of Western culture in the 21st.

These Gospel narratives of the Passion - the arrest, trial, scourging, and execution of Jesus - cast the Jews as those responsible, directly and indirectly, for the death of their Messiah and the son of God.

Cohen tracks the image of the Jew as the murderer ofthe Messiah and God from its origins to its most recent expressions.

A great deal has been written about Christian anti-Semitism, its roots, and its horrific consequences in world history.

This is the first book, however to focus on the powerful myth that has driven so much murderous hatred.

Animportant addition to the literature on Jewish-Christian relations, it should appeal to a wide variety of readers in both communities.