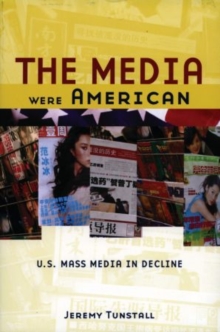 In 1977, Jeremy Tunstall published the landmark The Media Are American .

In it, he argued that while much of the mass media originated in Europe and elsewhere, the United States dominated global media because nearly every mass medium became industrialized within the United States. With this provocative follow-up, Tunstall chronicles the massive changes that have taken place in the media over the past forty years-changes that have significantly altered the "balance of power" within the global media landscape.

The Media Were American demonstrates that both the United States and its mass media have lost their previous moral leadership.

Instead of sole American control of the world news flow, we now see a world media structure comprised of interlocking national,regional, and cultural systems. From a relentlessly global point of view, Tunstall looks closely at China and India-and at their rapidly burgeoning populations-and also at the rise of the mass media in the Muslim world.

He considers the role of the media in the collapse of the Soviet Union, the ascendance of the Brazilian and Mexican soap opera, the increasing strength of "Bollywood"-the national cinema output of India-and the relative decline in influence of U.S. media. Reconsidering the very notion of "global media,"the book posits a reemergence of stronger national cultures and national media systems.