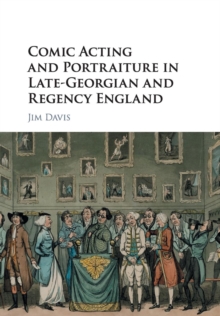 by Jim (University of Warwick) Davis

The popularity of the comic performers of late-Georgian and Regency England and their frequent depiction in portraits, caricatures and prints is beyond dispute, yet until now little has been written on the subject.

In this unique study Jim Davis considers the representation of English low comic actors, such as Joseph Munden, John Liston, Charles Mathews and John Emery, in the visual arts of the period, the ways in which such representations became part of the visual culture of their time, and the impact of visual representation and art theory on prose descriptions of comic actors.

Davis reveals how many of the actors discussed also exhibited or collected paintings and used painterly techniques to evoke the world around them.

Drawing particularly on the influence of Hogarth and Wilkie, he goes on to examine portraiture as critique and what the actors themselves represented in terms of notions of national and regional identity.