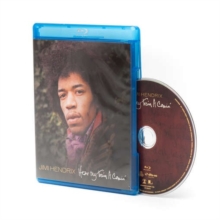 Documentary about the life and work of guitarist Jimi Hendrix.

Directed by Bob Smeaton, this critically acclaimed film shows previously unseen performances and home movies from the archive, as well as family letters, drawings and photographs providing an insight into the man behind the guitar.

The film also features interviews with Hendrix, commentary from fellow musicians and friends including Eddie Kramer, Steve Winwood and Paul McCartney and footage of his last ever concert in Germany just 12 days before his premature death at the age of 27.