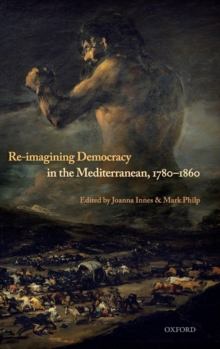 Re-Imagining Democracy in the Mediterranean, 1780-1860 Hardback

Mediterranean states are often thought to have 'democratised' only in the post-war era, as authoritarian regimes were successively overthrown.

On its eastern and southern shores, the process is still contested.

Re-imagining Democracy looks back to an earlier era, the late eighteenth and early nineteenth centuries, and argues it was this era when some modern version of 'democracy' in the region first began.

By the 1860s, representative regimes had been established throughout southern Europe, and representation was also the subject of experiment and debate in Ottoman territories.

Talk of democracy, its merits and limitations, accompanied much of this experimentation - though there was no agreement as to whether or how it could be given stable political form.

Re-imagining Democracy assembles experts in the history of the Mediterranean, who have been exploring these themes collaboratively, to compare and contrast experiences in this region, so that they can be set alongside better-known debates and experiments in North Atlantic states.

States in the region all experienced some form of subordination to northern 'great powers'.

In this context, their inhabitants had to grapple with broader changes in ideas about state and society whilestruggling to achieve and maintain meaningful self-rule at the level of the polity, and self-respect at the level of culture.

Innes and Philip highlight new research and ideas about a region whose experiences during the 'age of revolutions' are at best patchily known and understood, as well as to expand understanding of the complex and variegated history of democracy as an idea and set of practices.