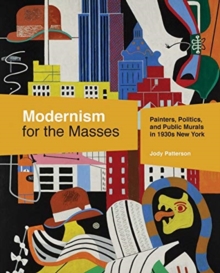 A mural renaissance swept the United States in the 1930s, propelled by the New Deal Federal Art Project and the popularity of Mexican muralism.

Modernism for the Masses examines the public murals (realized and unrealized) of these and other abstract painters and the aesthetic controversy, political influence, and ideological warfare that surrounded them.

Jody Patterson transforms standard narratives of modernism by reasserting the significance of the 1930s and explores the reasons for the omission of the mural's history from chronicles of American art.

Beautifully illustrated with the artists' murals and little-known archival photographs, this book recovers the radical idea that modernist art was a vital part of everyday life.