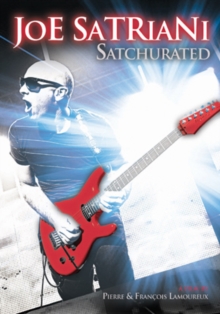 Live performance from the acclaimed US guitarist. Satriani has received a total of 15 Grammy nominations for 'Best Rock Instrumental', testament to both his ability as a musician and the longevity of his career.

This performance, drawn from his 2010 world tour, 'The Wormhole Tour', captures him live in Montreal and features tracks including 'Ice 9', 'The Mystical Potato Head Groove Thing' and 'Big Bad Moon'.