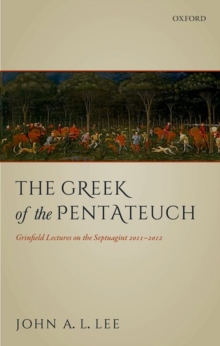 The Greek of the Pentateuch : Grinfield Lectures On The Septuagint 2011-2012 Hardback

The nature of the Greek of the Septuagint has long been debated.

Interference from the original Hebrew is present but scholars continue to disagree on its extent and significance.

This timely and authoritative contribution argues that the language the translators used was fundamentally the Greek of their time and that they had full competence in it.

The volume is divided into seven chapters which proceed through several topics: use of evidence, language variation, educated language, the presence of Greek idiom, the translators' collaboration, and freedom of choice in dealing with the Hebrew.

A final chapter draws conclusions not only about the Pentateuch translators' knowledge of Greek, but about the translators themselves, their achievement, and their audience.

The book presents a wide range of examples, comprising both vocabulary andsyntax, from the Septuagint itself, Greek papyri of the period found in Egypt, and Classical and Koine Greek literature.