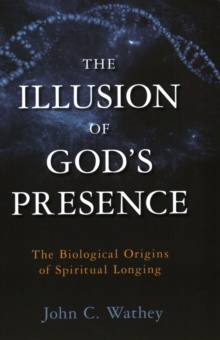 The Illusion of God's Presence : The Biological Origins of Spiritual Longing Hardback

An essential feature of religious experience across many cultures is the intuitive feeling of God's presence.

More than any rituals or doctrines, it is this experience that anchors religious faith, yet it has been largely ignored in the scientific literature on religion. Starting with a vivid narrative account of the life-threatening hike that triggered his own mystical experience, biologist John Wathey takes the reader on a scientific journey to find the sources of religious feeling and the illusion of God's presence.

Hisbook delves into the biological origins of this compelling feeling, attributing it to innate neural circuitry that evolved to promote the mother-child bond.

Dr. Wathey, a veteran neuroscientist, argues that evolution has programmed the infant brain to expect the presence of a loving being who responds to the child's needs.

As the infant grows into adulthood, this innate feeling is eventually transferred to the realm of religion, where it is reactivated through the symbols, imagery, and rituals of worship.

The author interprets our various conceptions of God in biological terms as illusory supernormal stimuli that fill an emotional and cognitive vacuum left over from infancy. These insights shed new light on some of the most vexing puzzles of religion, like the popular belief in a god who is judgmental and punishing, yet also unconditionally loving; the extraordinary tenacity of faith; the greater religiosity of women relative to men; religious obsessions with sex; the mysterious compulsion to pray; the seemingly irrepressible feminine attributes of God, even in traditionally patriarchal religions; and the strange allure of cults.

Finally, Dr. Wathey considers the hypothesis that religion evolved to foster reproductive success, arguing that, in an age of potentially ruinous overpopulation, magical thinking has become a luxury we can no longer afford, one that distracts us from urgent threats to our planet. Deeply researched yet elegantly written in a jargon-free and accessible style, this book presents a compelling interpretation of the evolutionary origins of spirituality and religion.