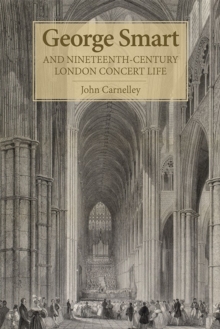 Sir George Thomas Smart (1776-1867) was a significant musical animateur of the early nineteenth century, who earned his living primarily as a conductor but was also significant as an organist, composer and recorder of events.

Smart established successful and pioneering London concert series, was a prime mover in the setting up of the Philharmonic Society and the Royal Academy of Music, and taught many of the leading singers of the day, being well versed in the Handelian concert tradition.

He also conducted the opera at the Covent Garden Theatre and introduced significant new works to the public - he was most notably an early champion of the music of Beethoven.

His journeys to Europe, and his contacts with the leading European musical figures of the day (including Weber, Meyerbeer, Spohr, and Mendelssohn), were crucial to the direction music was to take in nineteenth-century Britain.

This detailed account of Smart's life and career presents him within the context of the vibrant concert life of London and wider European musical culture.

It is the first full length, critical study of this influential musical figure. JOHN CARNELLEY is Deputy Director of Music and Head of Academic Music, Dulwich College, London. He holds a PhD in Historical Musicology from the University of London (Goldsmiths College) and has previously published research on the eighteenth-century organ manuscripts of John Reading, held in the Dulwich College Archive.