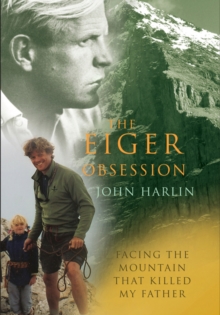 The Eiger Obsession : Facing the Mountain That Killed My Father Paperback / softback

In the 1960s an American named John Harlin II changed the face of Alpine climbing.

Harlin successfully summitted some of the most treacherous mountains in Europe.

But it was the North Face of the Eiger that became Harlin's obsession.

John Harlin III was nine years old when his father put together a terrific team for an ill-fated direct ascent of the notorious Eiger.

In the shadow of tragedy, young John Harlin III came of age possessed with the very same passion for risk that drove his father.

For years he successfully denied the siren call of the mountain that killed his father.

But in 2005, John Harlin could resist no longer. With his daughter, Siena - his very age at the time of his father's death - and with an IMAX Theatre filmmaking crew watching, he set off towards the Eiger.

This is an unforgettable story about fathers and sons, climbers and mountains, and dreamers who dare to challenge the earth.