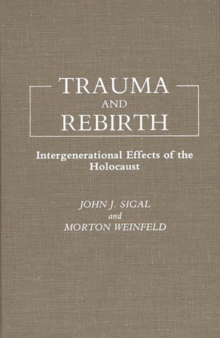 Trauma and Rebirth : Intergenerational Effects of the Holocaust Hardback

This volume examines the long-term consequences of the Holocaust on survivors and their children some four decades after the war.

This book represents the culmination of nine years of collaborative effort, consisting primarily of findings drawn from two sample surveys of Jewish residents in Montreal.

This volume covers new research topics that have been neglected in the survivor literature, including personality, familial interactions, vocational achievements, sociopolitical attitudes. an excellent source of material from a sociopolitical and psychological perspective.

The assessment of the impact of a political movement on the attitudes and psychological status of a minority population is informative.

The study of a large group of Holocaust survivors adds significantly to the scientific literature in this area. Contemporary PsychologyThe first empirical study of the psychological consequences of the Holocaust across three generations, this book assesses the long-term and intergenerational effects of severe victimization and of other forms of exposure to excessive, prolonged stress.

Although there can be no doubt that there are negative psychological and physical consequences for the survivors of the Holocaust, the authors present evidence here that contradicts the dominant thrust of previous studies, which emphasized dysfunction in the family life of survivors and psychological impairment in their children.

In addition to an intensive study of Holocaust survivors and their families, this book provides a yardstick against which the long-term and cross-generational impact of other potentially traumatic situations--war, earthquakes, flood, fire, assault, and so on--may be measured. The authors' research for this volume spans the disciplines of psychology, psychiatry, sociology, history, and ethnic studies.

The book, however, is written in an accessible style easily understood by the nonprofessional reader.

The culmination of a nine year collaborative effort, Trauma and Rebirth consists, primarily, of findings drawn from two sample surveys of Jewish residents in Montreal.

One survey focuses on Holocaust survivors, the second on children of survivors.

Both include control groups, and draw from unbiased, nonclinical, and non-self-selected populations.

Students and scholars of modern Jewish life and the Holocaust, or anyone interested in the study of trauma and victimization, will find Trauma and Rebirth an invaluable resource.