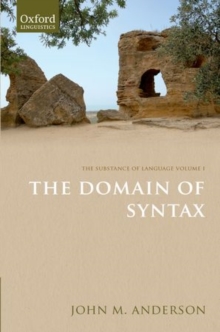 The Substance of Language Volume I: The Domain of Syntax Hardback

Part of the The Substance of Language Volume I series

The Substance of LanguageVolume I: The Domain of SyntaxVolume II: Morphology, Paradigms, and PeriphrasesVolume III: Phonology-Syntax AnalogiesJohn M. AndersonThe three volumes of The Substance of Language collectively overhaul linguistic theory from phonology to semantics and syntax to pragmatics and offer a full account of how the form/function relationship works in language.

The Domain of Syntax explores the consequences for syntax of assuming that language is grounded in cognition and perception.

It shows that syntax is characterized by a set of categories based on distinctions in what the categories are perceived to represent.

The first part of the book traces the twentieth-century development of anti-notionalism, culminating in the assumption that syntax is autonomous.

The author then looks at syntactic phenomena, many involving the fundamental notionof finiteness.

He considers whether the appeal to grounding permits a lexicalist approach that would allow syntax to dispense not only with structural mutations such as category-change and 'empty categories' but with universal grammar itself. The many detailed proposals of John Anderson's fine trilogy are derived from an over-arching conception of the nature of linguistic knowledge that is in turn based on the grounding of syntax in semantics and the grounding of phonology in phonetics, both convincingly subsumed under the notion of cognitive salience.