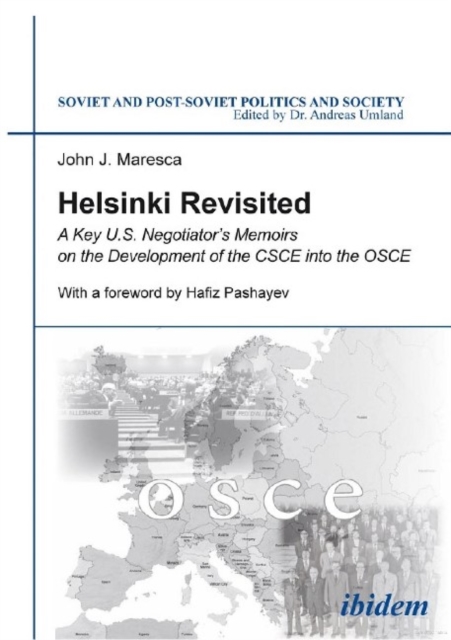 Helsinki Revisited : A Key U.S. Negotiator's Memoirs on the Development of the CSCE into the OSCE Paperback / softback

The Helsinki Final Act of the 1975 Conference on Security and Co-operation in Europe (CSCE) set the rules for legitimate changes in national frontiers: They must be accomplished by peaceful means and agreement.

Together with the Charter of Paris for a New Europe of 1990, the Helsinki Accords paved the way for a peaceful coexistence of the West and the Eastern Bloc.

The Paris conference ended the Cold War, issuing a "Joint Declaration of Twenty-two States," in which all member states of NATO and the Warsaw Pact affirmed they are no longer enemies.

The Helsinki process, continuing in the form of the Organization for Security and Co-operation in Europe (OSCE), resulted ultimately in the prevailing of pluralist democracy, market economy, and personal freedom.

Today, it may serve as an example for how to deal with the current situation in Ukraine and crises in other regions of the former Soviet Union.

John J. Maresca was a senior U.S. diplomat at the center of this long negotiating process.

He was sent as the first, and only, US Ambassador to the newly-independent states after the break-up of the USSR-the American Ambassador to the "Near Abroad"-and started a negotiating process to try to end the one conflict in the region at that time.

With this book, he presents his personal memoirs of how it was possible to reach the Helsinki Accords and following agreements.

A story of astonishing change and evolution which is as eminently relevant today as it was 40 years ago.