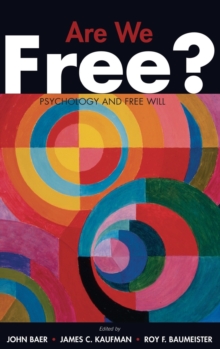 Are We Free? : Psychology and Free Will Hardback

People generally act as though they believe in their own free will: they don't feel like automatons, and they don't treat one another as they might treat robots. While acknowledging many constraints and influences on behavior, people nonetheless act as if they (and their neighbors) are largely in control of many if not most of the decisions they make. Belief in free will also underpins the sense that people are responsible for their actions. Psychological explanations of behavior rarelymention free will as a factor, however. Can psychological science find room for free will? How do leading psychologists conceptualize free will, and what role do they believe free will plays in shaping behavior?

In recent years a number of psychologists have tried to solve one or more of the puzzles surrounding free will.

This book looks both at recent experimental and theoretical work directly related to free will and at ways leading psychologists from all branches of psychology deal with the philosophical problems long associated with the question of free will, such as the relationship between determinism and free will and the importance of consciousness in free will.

It also includes commentaries byleading philosophers on what psychologists can contribute to long-running philosophical struggles with this most distinctly human belief. These essays should be of interest not only to social scientists, but to intelligent and thoughtful readers everywhere.