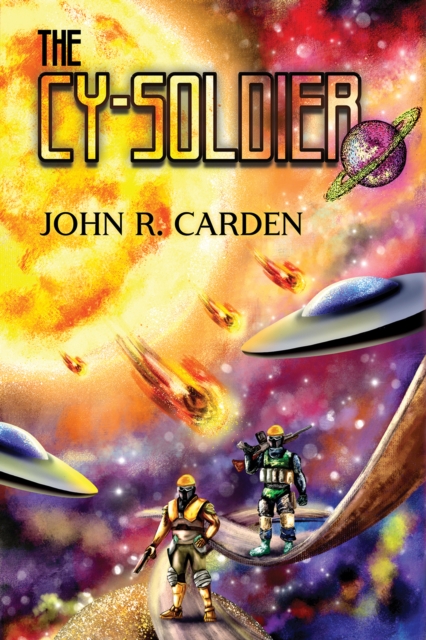 The Cy-Soldier is the story of a young United States soldier, Samuel "Slate" Steele, who is critically injured by a terrorist bomb while serving as a pilot and soldier in a Black Ops team in the Middle East.

He is immediately airlifted to a military hospital, where he is stabilized and sent to a secret hospital in Germany.

At that hospital, located deep underground, and using advanced medical technology, the United States military has his arms, legs, ear canals, and eyes successfully replaced with electronics and steel.

After a very successful recovery, the young man serves for several more years; then he tries to retire and marry his childhood sweetheart back in his hometown.

But this does not work out. Deeply saddened, Slate starts roaming the North American continent, trying to forget the last image of her blue eyes staring into his eyes.

One day, while camping in the far western United States, the young man happens to see a UFO land on a high mesa.

This leads Slate to a string of far-out adventures. His life path eventually leads him from Earth to fantastic exploits out among the stars, journeying through the planets of the Interstellar Condominium of Planets and Empire (ICOPE), meeting and dealing with Reptiloids, Insectoids, Snakoids, and even other Humanoids and Colloid Cloud beings.