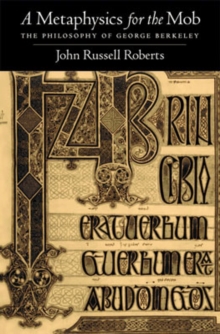 A Metaphysics for the Mob : The Philosophy of George Berkeley Hardback

Roberts first defends Berkeley's claim that in fact, his philosophy does square with commonsense (the beliefs of what he and Berkeley call "the mob"). He then defends Berkeley's positive metaphysics, which was that reality consists of spiritual substances, not material ones. Lastly, Roberts emphasizes the importance of the distinction between the active and passive in Berkeley's system, and connects Berkeley's views on language and meaning to future figures likeAustin and Wittgenstein.