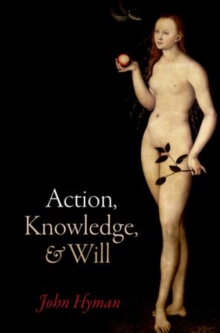 Action, Knowledge, and Will Hardback

Human agency has four irreducibly different dimensions - psychological, ethical, intellectual, and physical - which the traditional idea of a will tended to conflate.

Twentieth-century philosophers criticized the idea that acts are caused by 'willing' or 'volition', but the study of human action continued to be governed by a tendency to equate these dimensions of agency, or to reduce one to another.

Cutting across the branches of philosophy, from logic andepistemology to ethics and jurisprudence, Action, Knowledge, and Will defends comprehensive theories of action and knowledge, and shows how thinking about agency in four dimensions deepens our understanding of human conduct and its causes.