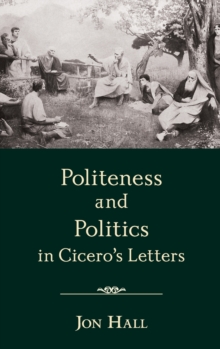 Politeness and Politics in Cicero's Letters presents a fresh examination of the letters exchanged between Cicero and correspondents, such as Pompey, Julius Caesar and Mark Antony during the final turbulent decades of the Roman Republic.

Drawing upon sociolinguistic theories of politeness, it argues that formal relationships between powerful members of the elite were constrained by distinct conventions of courtesy and etiquette.

By examining in detail theselinguistic conventions of politeness, Jon Hall presents new insights into the social manners that shaped aristocratic relationships. The book begins with a discussion of the role of letter-writing within the Roman aristocracy and the use of linguistic politeness to convey respect to fellow members of the elite.

Hall then analyzes the deployment of conventionalized expressions of affection and goodwill to cultivate alliances with ambitious rivals and the diplomatic exploitation of "polite fictions" at times of political tension.

The book also explores the strategies of politeness employed by Cicero and his correspondentswhen making requests and dispensing advice, and when engaging in epistolary disagreements. (His exchanges with Appius Claudius Pulcher, Munatius Plancus, and Mark Antony receive particular emphasis.) Its detailed analysis of specific letters places the reader at the very heart of Late Republicanpolitical negotiations and provides a new critical approach to Latin epistolography.