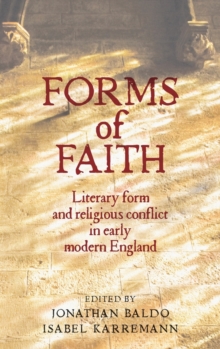 This book explores the role of literature as a means of mediating religious conflict in early modern England.

Marking a new stage in the 'religious turn' that generated vigorous discussion of the changes and conflicts brought about by the Reformation, it unites new historicist readings with an interest in the ideological significance of aesthetic form.

It proceeds from the assumption that confessional differences did not always erupt into hostilities but that people also had to arrange themselves with divided loyalties - between the old faith and the new, between religious and secular interests, between officially sanctioned and privately held beliefs.

What role might literature have played here? Can we conceive of literary representations as possible sites of de-escalation?

Do different discursive, aesthetic, or social contexts inflect or deflect the demands of religious loyalties?

Such questions open a new perspective on post-Reformation English culture and literature. -- .