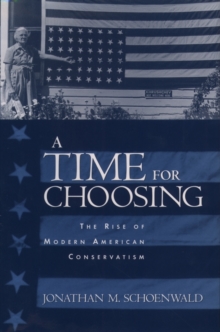 A Time for Choosing : The Rise of Modern American Conservatism Paperback / softback

How did American conservatism, little more than a collection of loosely related beliefs in the late 1940s and early 1950s, become a coherent political and social force in the 1960s?

What political strategies originating during the decade enabled the modern conservative movement to flourish? And how did mainstream and extremist conservatives, frequently at odds over tactics and ideology, each play a role in reshaping the Republican Party?

In the 1960s conservativesdid nothing less than engineer their own revolution.

A Time for Choosing tells the remarkable story behind this transformation. In the first decade after World War II, two broad branches of organized conservatism emerged: mainstream or electoral conservatism and extremist conservatism.

By the end of the 1950s, both groups had grown dissatisfied with the Republican party, yet they disagreed about how to create political change.

Looking to private organizations as a means of exerting influence, extremists tapped the reserves of conservative discontent and formed maverick factions such as the John Birch Society. Mainstream conservatives, on the other hand, attempted to capture the GOP, seeking reform through the electoral and party systems.

They "drafted" Barry Goldwater as their presidential candidate in 1964, and though he suffered a devastating defeat, the campaign electrified millions of Americans.

Four yearslater, American conservatism, a perennial underdog in national politics, was firmly in the ascent.

A Time for Choosing, making unprecedented use of archival material to document the strategies and influence of grassroots citizens' groups, provides the fullest picture yet of the way conservatism's two cultures combined to build a triumphant political movement from the ground up. Where previous accounts of conservatism's rise tend to speed from 1964 through the start of the Reagan era in 1980, A Time for Choosing explores in dramatic detail how conservatives took immediate action following the Goldwater debacle.

By decade's end, independent "splinter groups" vied for the right to bear the conservativestandard into the next decade, demonstrating the movement's strength and vitality. Although conservative ideology was not created during the 1960s, its political components were.

Here, then, is the story of the rise of the modern conservative movement.

Provocative and beautifully written, A Time for Choosing is a book for anyone interested in politics and history in the postwar era.