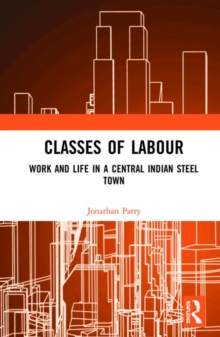 Classes of Labour : Work and Life in a Central Indian Steel Town Hardback

Classes of Labour: Work and Life in a Central Indian Steel Town is a classic in the social sciences.

The rigour and richness of the ethnographic data of this book and its analysis is matched only by its literary style.

This magnum opus of 732 pages, an outcome of fieldwork covering twenty-one years, complete with diagrams and photographs, reads like an epic novel, difficult to put down.

Professor Jonathan Parry looks at a context in which the manual workforce is divided into distinct social classes, which have a clear sense of themselves as separate and interests that are sometimes opposed.

The relationship between them may even be one of exploitation; and they are associated with different lifestyles and outlooks, kinship and marriage practices, and suicide patterns.

A central concern is with the intersection between class, caste, gender and regional ethnicity, with how class trumps caste in most contexts and with how classes have become increasingly structured as the 'structuration' of castes has declined.

The wider theoretical ambition is to specify the general conditions under which the so-called 'working class' has any realistic prospect of unity.