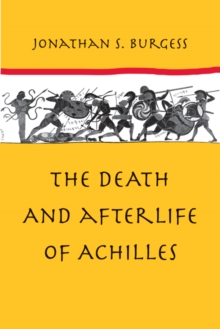 The Death and Afterlife of Achilles Hardback

Achilles' death-by an arrow shot through the vulnerable heel of the otherwise invincible mythic hero-was as well known in antiquity as the rest of the history of the Trojan War.

However, this important event was not described directly in either of the great Homeric epics, the Iliad or the Odyssey.

Noted classics scholar Jonathan S. Burgess traces the story of Achilles as represented in other ancient sources in order to offer a deeper understanding of the death and afterlife of the celebrated Greek warrior.

Through close readings of additional literary sources and analysis of ancient artwork, such as vase paintings, Burgess uncovers rich accounts of Achilles' death as well as alternative versions of his afterlife.

Taking a neoanalytical approach, Burgess is able to trace the influence of these parallel cultural sources on Homer's composition of the Iliad.

With his keen, original analysis of hitherto untapped literary, iconographical, and archaeological sources, Burgess adds greatly to our understanding of this archetypal mythic hero.