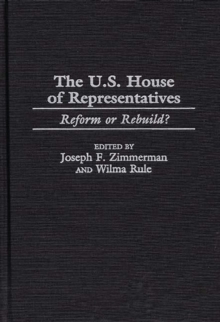 The U.S. House of Representatives : Reform or Rebuild? Hardback

The unrepresentativeness of the U.S. House of Representatives-in terms of ethnicity, gender, race, and socio-economic status-and its nearly closed system for election have generated questions about the legitimacy and authority of the House as an institution which represents citizens and whether House membership should mirror directly the diverse population of the nation. This essay collection examines the causes of the unrepresentative character of the House and offers recommendations to make it a more representative deliberative body.

The alternative electoral systems are multi-member district ones and can be employed only if Congress repeals its requirement that members of the House be elected by single-member districts.

Other possible reforms include enlargement of the size of the House, term limits, a new system of election campaign finance, and more effective regulation of campaign contributions and expenditures.

The essays provide balanced views on the effects of various reform proposals by including chapters by experts who warn of the possible unintended effects of reforms or argue that the proposed reforms are not needed and stress the need for actions to strengthen deliberations, promote civility, adjust the committee system, reduce the workload of members, and promote better public understanding of the House.

An important collection for students, scholars, and researchers interested in the workings of Congress and American politics.