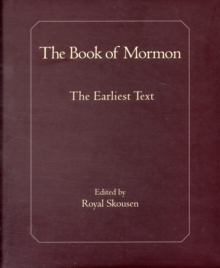 The Book of Mormon : The Earliest Text Hardback

Based on the earliest sources available, this corrected text represents the most accurate and readable edition of theBook of Mormonever published First published in 1830, the Book of Mormon is the authoritative scripture of the Church of Jesus Christ of Latter-day Saints and its estimated 13 million members.

Over the past twenty-one years, editor Royal Skousen has pored over Joseph Smith's original manuscripts and identified more than 2,000 textual errors in the 1830 edition.

Although most of these discrepancies stem from inadvertent errors in copying and typesetting the text, the Yale edition contains about 600 corrections that have never appeared in any standard edition of the Book of Mormon, and about 250 of them affect the text's meaning.

Skousen's corrected text is a work of remarkable dedication and will be a landmark in American religious scholarship. Completely redesigned and typeset by nationally award-winning typographer Jonathan Saltzman, this new edition has been reformatted in sense-lines, making the text much more logical and pleasurable to read.

Featuring a lucid introduction by historian Grant Hardy, the Yale edition serves not only as the most accurate version of the Book of Mormon ever published but also as an illuminating entryway into a vital religious tradition.