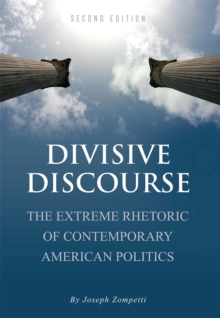 The book examines the techniques and contents of the divisive discourse that pervades contemporary American political conversation.

It teaches us about extreme rhetoric, thus enabling readers to be more critical consumers of information. The book provides a framework for identifying and interpreting extreme language.

Readers learn about rhetorical fallacies and the strategies used by political pundits to manipulate and spin information.

In subsequent chapters the author examines and analyzes how divisive discourse is used in discussions of specific political issues including homosexual rights, gun control, healthcare, and issues in the 2016 presidential election.

New chapters explore the rhetoric of race and the divisive discourse in foreign policy. Divisive Discourse provides insight into how polarizing rhetoric leads to societal fragmentation, and how it fosters apathy, confusion, animosity, and ignorance.

By exposing the rhetoric of division and teaching readers how to confront it, the book reinvigorates the potential to participate in politics and serves as a guide for how to have civil discussions about controversial issues.

Divisive Discourse is an ideal teaching tool for anyone interested in contemporary issues and courses in political science, media studies, argument, or rhetoric.