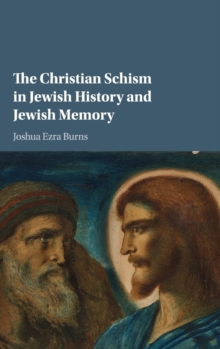 The Christian Schism in Jewish History and Jewish Memory Hardback

How did Jews perceive the first Christians? By what means did they come to appreciate Christianity as a religion distinct from their own?

In The Christian Schism in Jewish History and Jewish Memory, Professor Joshua Ezra Burns addresses those questions by describing the birth of Christianity as a function of the Jewish past.

Surveying a range of ancient evidences, he examines how the authors of Judaism's earliest surviving memories of Christianity speak to the perspectives of rabbinic observers who were conditioned by the unique circumstances of their encounters with Christianity to recognize its adherents as fellow Jews.

Only upon the decline of the Church's Jewish demographic were their successors compelled to see Christianity as something other than a variation of Jewish cultural expression.

The evolution of thought in the classical Jewish literary record thus offers a dynamic account of Christianity's separation from Judaism counterbalancing the abrupt schism attested in contemporary Christian texts.