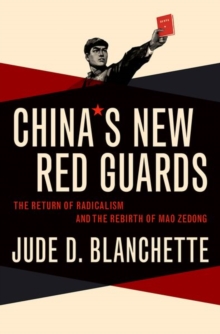 China's New Red Guards : The Return of Radicalism and the Rebirth of Mao Zedong Hardback

Ever since Deng Xiaoping effectively de-radicalized China in the 1980s, there have been many debates about which path China would follow.

Would it democratize? Would it embrace capitalism? Would the Communist Party's rule be able to withstand the adoption and spread of the Internet?

One debate that did not occur in any serious way, however, was whether Mao Zedong would make a political comeback. As Jude Blanchette details in China's New Red Guards, contemporary China is undergoing a revival of an unapologetic embrace of extreme authoritarianism that draws direct inspiration from the Mao era.

Under current Chinese leader Xi Jinping, state control over the economy is increasing, civil society is under sustained attack, and the CCP is expanding its reach in unprecedented new ways.

As Xi declared in late 2017, "Government, military, society and schools, north, south, east andwest-the party is the leader of all." But this trend is reinforced by a bottom-up revolt against Western ideas of modernity, including political pluralism, the rule of law, and the free market economy.

Centered around a cast of nationalist intellectuals and activists who have helped unleash a wave of populist enthusiasm for the Great Helmsman's policies, China's New Red Guards not only will reshape our understanding of the political forces driving contemporary China, it will also demonstrate how ideologies can survive andprosper despite pervasive rumors of their demise.