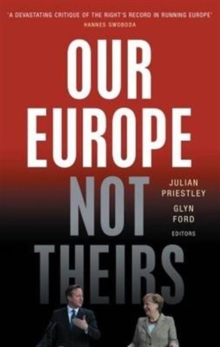 Our Europe, Not Theirs Paperback / softback

A no vote in the referendum would be disastrous not only for the left, but for the country as a whole and for European politics.

The editors argue, in the new introductory chapter to this 2nd edition., that the success of the left in Britain depends on successfully working with its European counterparts to shift the political balance in the EU.

Contributors argue that the UK left should work with other European progressives to create a programme for economic, social and ecological renewal for Europe in the world.

They also offer a radical agenda for change and reform in Europe.

They discuss austerity's throttling of Europe's growth prospects; suggest how to respond to the return of poverty and rampant inequalities; and how to challenge unaccountable corporate power.

They also engage critically with Europe's environmental policies, which have been long on promise and short on delivery; its short-sighted immigration management; and its sacrifice of fair trade in the name of an ideological commitment to unbridled globalisation.Contributors: Nick Costello, Patrick Costello, Glyn Ford, David Martin MEP, Linda McGavan MEP, Julian Priestley, Derek Reed Julian Priestley is former Secretary General of the European Parliament (1997/2007) and Glyn Ford is the former leader of the Labour MEPs at the Parliament.