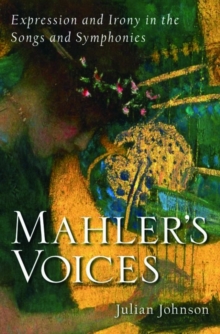 Mahler's Voices : Expression and Irony in the Songs and Symphonies Hardback

Passionate and intense in one moment, ironic or brash in the next, Mahler's music speaks with a diversity of voices that often undermine its own ideals of unity, narrative struggle and transcendent affirmation.

The composer plays constantly with musical genres and styles, moving between them without warning in a way that often bewildered his contemporaries.

Ranging freely across Mahler's symphonies and songs in a thoughtful and thorough study of his musical speech,Julian Johnson considers how this body of music foregrounds the idea of artifice, construction and musical convention while at the same time presenting itself as act of authentic expression and disclosure.

Mahler's Voices explores the shaping of this music through strategies of calling forth its ownmysterious voice-as if from nature or the Unconscious-while at other times revealing itself as a made object, often self-consciously assembled from familiar and well-worn materials. A unique study not of Mahler's works as such but of Mahler's musical style, Mahler's Voices brings together a close reading of the renowned composer's music with wide-ranging cultural and historical interpretation.

Through a radical self-awareness that links the romantic irony of the late 18th-century to the deconstructive attitude of the late 20th-century, Mahler's music forces us to rethink historical categories themselves.

Yet what sets it apart, what continues to fascinate anddisturb, is the music's ultimate refusal of this position, acknowledging the conventionality of all its voices while at the same time, in the intensity of its tone, speaking "as if" what it said were true.

However bound up with the Viennese modernism that Mahler prefigured, the urgency of this act remainspowerfully resonant for our own age.