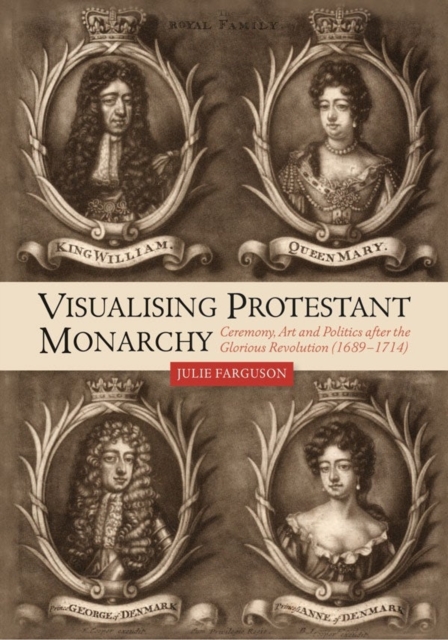 This book provides the first comprehensive, comparative study of the visual culture of monarchy in the reigns of William and Mary and Queen Anne.

It makes innovative use of material evidence and new primary sources to re-evaluate the practice of kingship and queenship to produce an original interpretation of the British monarchy during a period of vital transformation.

The quarter century between the Glorious Revolution and the Georgian era witnessed prolonged military conflict with France and the birth of what we now call Great Britain.

This book argues that a new style of monarchy likewise emerged in this period and that its survival largely depended on the efforts of the royal family: two English queens, a Dutch king and a Danish prince. Through a study of art and material culture (paintings, prints, the decorative arts, architecture, dress and royal insignia) within the broader political context, the book explores how the English people were persuaded to transfer their loyalties from a traditional style of kingship, centred on ideas of divinely appointed rule and hereditary right, to one rooted in Protestantism and Parliament.

The book argues that both ceremony and art played a vital role in the way the monarchy functioned after the Glorious Revolution.

Crucially, it examines not only the production of images and use of ceremony but also the ways in which they were received by audiences, both in England and abroad.

The book sets the on-going changes in the ideology of British monarchy within the wider context of royal politicking in Europe and pays close attention to gender and the practice of queenship as well as the ways in which military conflict shaped royal representational culture.

Using a method that is centred on the visual - ceremonies and art - and on visuality, the study makes an original and important contribution to our understanding not only of the monarchy but also the political culture of the post-Glorious Revolution era.