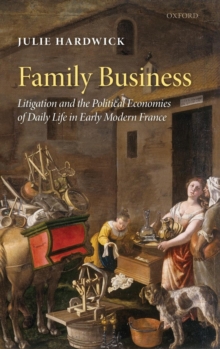 by Julie (Professor & Director of the Institute for Historical Studies, University of Texas a Hardwick

In seventeenth-century France, families were essential as both agents and objects in the shaping of capitalism and growth of powerful states - phenomena that were critical to the making of the modern world.

For household members, neighbours, and authorities, the family business of the management of a broad range of tangible and intangible resources - law, borrowing, violence, and marital status among them - was central to political stability, economic productivityand cultural morality.

The business of family life involved relationships that could be intimate (family and neighbours), intermediate (litigant and judge) or distant (governing authority and subject), and the resources in question were the currency of the early modern world these people knew.

In allthese regards, litigation was a key means of negotiating and contesting the challenges of daily life and the larger developments in which they were embedded. The relationships between families, economies, and states have often been reframed but the perils as well as promises have persisted.

Then, as now, husbands and wives found the experience of marriage to be fraught with uncertainty and risk; economic insecurity and ubiquitous borrowing were profound challenges; domestic violence was a telling marker of inequality in families.

Julie Hardwick examines a critical period in the long history of family business to highlight the centrality of the livedexperiences of working families in major political, economic, and cultural transitions.