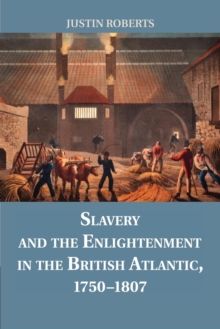 Slavery and the Enlightenment in the British Atlantic, 1750-1807 Paperback / softback

This book examines the daily details of slave work routines and plantation agriculture in the eighteenth-century British Atlantic, focusing on case studies of large plantations in Barbados, Jamaica and Virginia.

Work was the most important factor in the slaves' experience of the institution.

Although scholars often associate the late eighteenth-century Enlightenment with the rise of notions of liberty and human rights and the dismantling of slavery, this book explores the dark side of the Enlightenment for plantation slaves.

Many planters increased their slaves' workloads and employed supervisory technologies to increase labor discipline in ways that were consistent with the process of industrialization in Europe.

British planters offered alternative visions of progress by embracing restrictions on freedom and seeing increasing labor discipline as central to the project of moral and economic improvement.