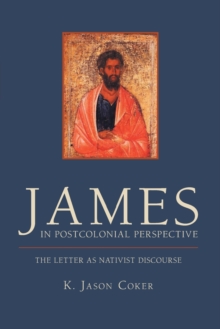 K. Jason Coker argues that postcolonial theory and the theoretical perspectives of Aime Cesaire, Frantz Fanon, and Ng?g? wa Thiong'o allow us to understand how these themes converge in the letter.

The emphasis in James, which Coker argues is a genuine, early letter from Jerusalem, upon purity and moral perfection functions as nativist discourse that constructs a pious identity by simultaneously opposing the exploitation of the Roman Empire and a peculiar Pauline form of hybridity that compromises with it.

James refutes Roman cultural practices such as the patronage system and economic practices that threaten the identity of the letter's recipients.

At the same time, James condemns those who would transgress the boundaries between purity and impurity, God and "world," as "whores," "sinners," and "two-faced." Coker understands both Paul and James as competing leaders seeking to negotiate Judean identity in relation to the Roman Empire.Paul's capacity to interchange his nested identities based on his circumstances puts him at odds with James's purist, nativist notions of identity, which starkly oppose the Roman Empire and call hearers in "the Diaspora" to find their home in the empire of God.