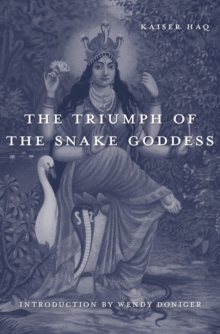 The Triumph of the Snake Goddess Hardback

Snakes exist in the myths of most societies, often embodying magical, mysterious forces.

Snake cults were especially important in eastern India and Bangladesh, where for centuries worshippers of the indigenous snake goddess Manasa resisted the competing religious influences of Indo-Europeans and Muslims.

The result was a corpus of verse texts narrating Manasa's struggle to win universal adoration. The Triumph of the Snake Goddess is the first comprehensive retelling of this epic tale in modern English.

Following the tradition of mangalkavyas-Bengali verse narratives celebrating the deeds of deities in order to win their blessings-the tale opens with a creation myth and a synopsis of Indian mythology, zooming in on Manasa, the miraculous child of the god Shiva.

Manasa easily wins the allegiance of everyone except the wealthy merchant Chand, who holds fast in his devotion to Shiva despite seeing his sons massacred.

A celestial couple is incarnated on earth to fulfill Manasa's design: Behula, wife to one of Chand's slain sons, undertakes a harrowing odyssey to restore him to life with Manasa's help, ultimately persuading Chand to bow to the snake goddess. A prologue by Haq explores the Bengali oral, poetic, and manuscript traditions behind this Hindu folk epic-a vibrant part of popular Bengali culture, Hindu and Muslim, to this day-and an introduction by Wendy Doniger examines the history and significance of snake worship in classical Sanskrit texts.