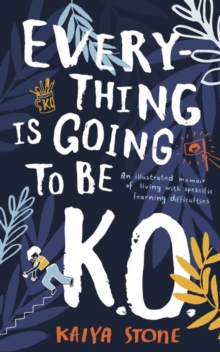 Everything Is Going to Be K.O. : An illustrated memoir of living with specific learning difficulties Hardback

A hilarious and heartfelt illustrated memoir of living with specific learning difficulties.

In Everything is Going to be K.O., Kaiya Stone writes about her experiences of living with specific learning difficulties: from struggling at school, to being diagnosed with dyslexia and dyspraxia at university, and performing her own one-woman stand up show inspired by her journey.

Always funny and unfailingly honest, Kaiya not only outlines the frustrations of having SpLDs, but also the ways in which they have fuelled her creativity.

She calls for neurodiversity to be celebrated so that instead of questioning how we are 'supposed' to think, we instead take pride in our cognitive differences.

Everything is Going to be K.O. is for anyone who anyone who knows, or has wondered, what it is like to live with learning difficulties today.