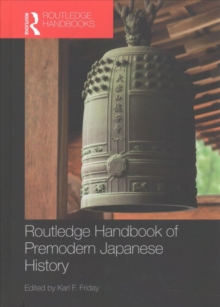 Scholarship on premodern Japan has grown spectacularly over the past four decades, in terms of both sophistication and volume.

A new approach has developed, marked by a higher reliance on primary documents, a shift away from the history of elites to broader explorations of social structures, and a re-examination of many key assumptions.

As a result, the picture of the early Japanese past now taught by specialists differs radically from the one that was current in the mid-twentieth century. This handbook offers a comprehensive historiographical review of Japanese history up until the 1500s.

Featuring chapters by leading historians and covering the early Jomon, Yayoi, Kofun, Nara, and Heian eras, as well as the later medieval periods, each section provides a foundational grasp of the major themes in premodern Japan.

The sections will include:Geography and the environmentPolitical events and institutionsSociety and cultureEconomy and technology The Routledge Handbook of Premodern Japanese History is an essential reference work for students and scholars of Japanese, Asian, and World History.