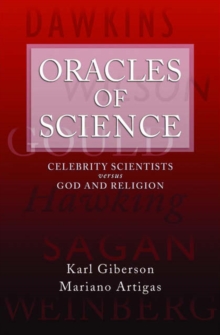 Oracles of Science : Celebrity Scientists versus God and Religion Hardback

Science is firmly at the center of both our contemporary understanding of the world and our hope for the future.

For some, it has displaced religion, and those who remain religious must contend with challenges posed by science.

Few, however, have direct scientific knowledge. Rather the impression of science held by the wider culture is based on the work of science popularizers -- public figures who create the image of science received by ordinary people.

Furthermore, the opinions of these public intellectuals on the relationship between science and religion are often controversial, personal, and even idiosyncratic.

Nevertheless they become widely known andperceived by many as authoritative conclusions derived from science.

The Oracles of Science examines the popular writings of the six scientists who have been the most influential in shaping our perception of science, how it works, and how it relates to other fields of human endeavor, especially religion.

Wilson, and physicists Carl Sagan, Stephen Hawking, and Steven Weinberg, have become public intellectuals,articulating a much larger vision for science and what role it should play in the modern worldview. The scientific prestige and literary eloquence of each of these great thinkers combine to transform them into whatcan only be called oracles of science.

Their controversial, often personal, sometimes idiosyncratic opinions become widely known and perceived by many to be authoritative.

Curiously, the leading "oracles of science" are predominantly secular in ways that don't reflect the distribution of religious beliefs within the scientific community.

Many of them are even hostile to religion, creating a false impression that science as a whole is incompatible with religion.

Karl Giberson and Mariano Artigasoffer an informed analysis of the views of these six scientists, carefully distinguishing science from philosophy and religion in the writings of the oracles.

This book will be welcomed by many whoare disturbed by the tone of the public discourse on the relationship between science and religion and will challenge others to reexamine their own preconceptions about this crucial topic.