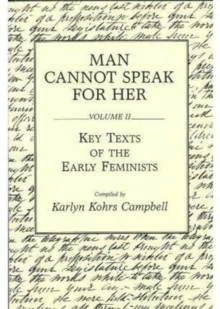 The right to cast a ballot from a feminine hand occupied the attention and efforts of hundreds of women for more than a century in the U.S. In these two volumes Campbell (University of Minnesota) provides a basic understanding of two processes: the development of the rhetoric used by the women who argued for equal rights, and the constraints and sanctions applied to those women who affronted the norms of society's expectation that true women were seldom seen and never spoke in public.

The first volume lays the foundation for the analysis of rhetorical style and content by its fine introduction and by a succession of chapters organized chronologically, with biographical sketches and excerpts from speeches. It includes a chapter specifically addressed to issues of sex, race, and class faced by African American women. Volume 2 is not a continuation of the first, but contains the texts on which the first volume is based. The biographical and historical sections are gracefully written and well organized, but the greatest value of the set lies in the actual words of the feminist leaders and Campbell's skillfull analyses. Every women's studies program must have this available. Upper-division undergraduates and above. Choice