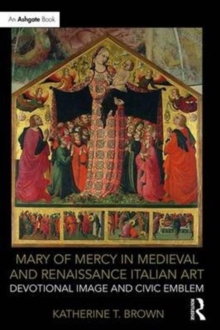 Mater Misericordiae-Mother of Mercy-emerged as one of the most prolific subjects in central Italian art from the late thirteenth through the sixteenth centuries.

With iconographic origins in Marian cult relics brought from Palestine to Constantinople in the fifth century, the amalgam of attributes coalesced in Armenian Cilicia then morphed as it spread to Cyprus.

An early concept of Mary of Mercy-the Virgin standing with outstretched arms and a wide mantle under which kneel or stand devotees-entered the Italian peninsula at the ports of Bari and Venice during the Crusades, eventually converging in central Italy.

The mendicant orders adopted the image as an easily recognizable symbol for mercy and aided in its diffusion.

In this study, the author's primary goals are to explore the iconographic origins of the Madonna della Misericordia as a devotional image by identifying and analyzing key attributes; to consider circumstances for its eventual overlapping function as a secular symbol used by lay confraternities; and to discuss its diaspora throughout the Italian peninsula, Western Europe, and eastward into Russia and Ukraine.